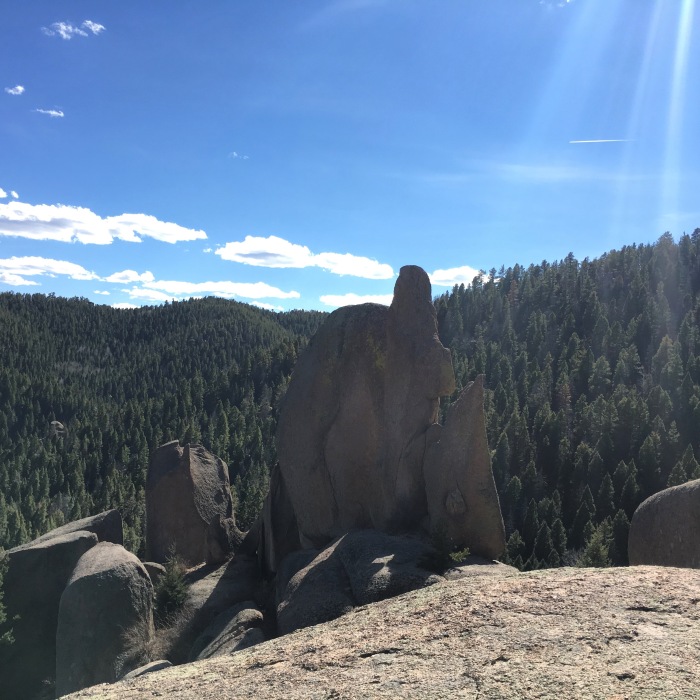 On a recent trip to the great state of Colorado, I had the opportunity to get outside every day in pretty spectacular settings. Walking, running, hiking and skiing (and occasionally falling on my ass) in the slightly less oxygenated mountains of CO proved to be exactly what this doctor ordered. Superlatives came in the hundreds – family, puppies, mountain air, but one of the highlights for sure was catching up with B, my college roommate, one of my running Gurus, on a long hike in the backcountry with the family and four dogs. 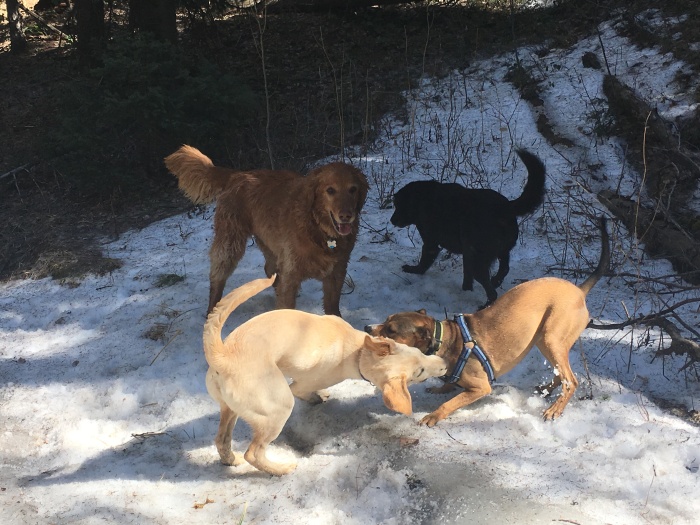 We passed evidence of mountain lions, an old plane crash, ate that awesome hiking lunch of apples, grapes and cheese that tastes as good as a meal at a Michelin Star restaurant in Napa, but mostly, just basked in that rare opportunity to talk for hours with a great friend who’s known you forever.

Not your everyday hike in the backcountry

Chatting the afternoon away with old friends – PRICELESS

Over an après-hike happy hour, I invited B to join us for a nice long flat run in the morning. B upped the ante and invited us to do “The Incline.” Within five minutes, plans changed. I was the only one joining B for this Sunday morning activity. B has talked me into some crazy activities in the past – I surely never would have run one marathon without her urging me on, and she’s never led me astray (cursing yes; floundering or failing – No). But it kind of worried me that three other active peeps turned down the invitation to do the incline.

The Incline, it turns out, is less than a mile up. However over that distance is a 2,000 foot elevation gain. I love running – on flat land. I love hiking – up and down. This was up up up. It is the beginning of the Pike’s Peak ascent (a 14-er). I had been “at altitude” for six days, however within five minutes of starting up The Incline, my lungs and legs didn’t give a crap about that. No earbuds, every man and woman for herself (that was our plan), I was alone in my own head for this climb.

My mind just went! I started thinking about some of the things B talked me into that seemed crazy initially, hurt somewhat during, and wound up being great in the end: skiing a double black in Crested Butte called “Elevator Shaft”, running the DC monuments at midnight in single digit temps with dogs on New Year’s Eve after an appropriate amount of wine & Indian food: 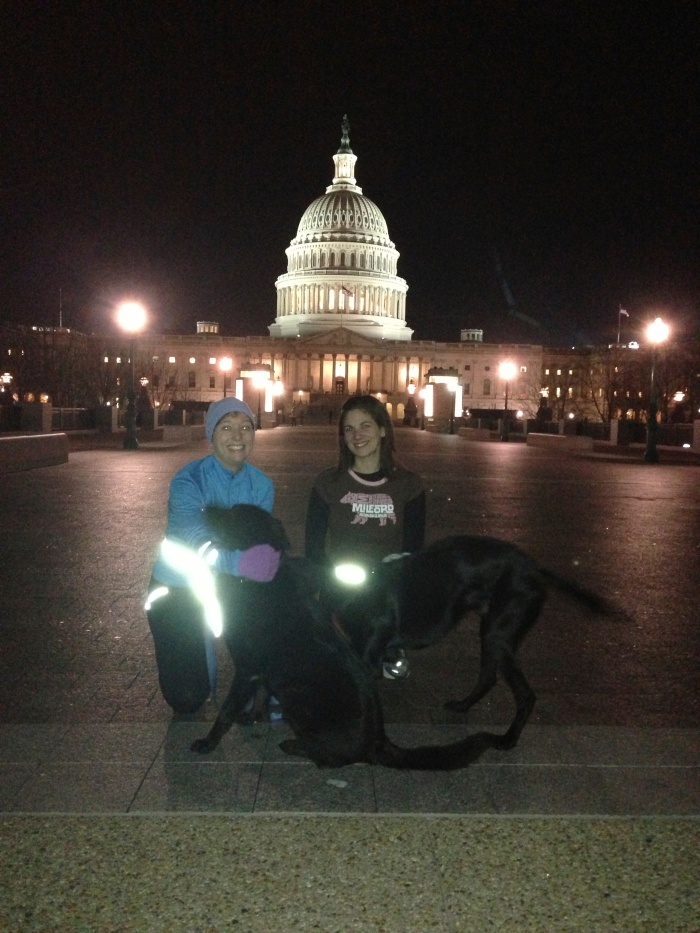 And that time she paced me to run a marathon in under four hours, when at mile 22 I threatened to “twist my ankle and fall off the causeway into the Atlantic Ocean” because then I wouldn’t have to finish the race:

B: “Lizzie. Do you feel dizzy, like you are going to pass out?”

B: “Then you are finishing this race in under four hours and beating Sarah Palin’s PR.” 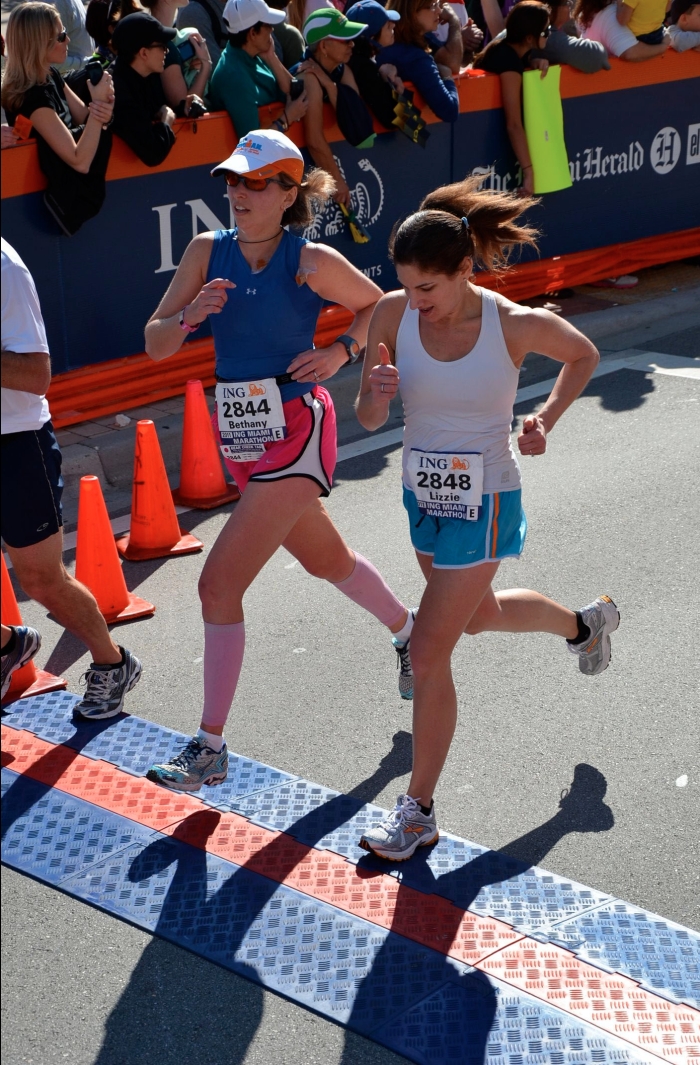 I also thought about some other crazy adventures I’d wound up in – that glacier hike walking over crevasses in a white out not 100% sure we were on the right track to Eagle Glacier Hut in Alaska, asking myself out loud why I put myself in these positions, why I made myself pound out the music to CATS one summer when my father accused me of being tone-deaf, just to prove him wrong. What am I still trying to prove???

In the Chugach on the Glacier

But the part that stuck in my head on this climb, which just burned more and more with every step up, was the suffering. Head down, not looking up at all for fear I’d never finish, I felt the fear of the steep on the double black; I felt the cold of that winter night in DC; the pain and fatigue at mile 22; the borderline panic stepping over a crevasse; the little girl desperate to prove to her dad that she could carry a tune. Soon, all that noise turned into thoughts of real suffering. Learning the day before of a friend – a young healthy woman, mother of two young children, who is battling cancer, undergoing surgery, chemo and radiation; soldiers on a battlefield crawling towards injured friends and innocent people, refugees risking long hard journeys over land and sea for a chance at saving the lives of their children; giving bad news in the hospital – the worst of the worst, being with people as they face the death of their loved ones, saying goodbye to futures they had counted on.

All of a sudden I looked up…it felt unbearable. I was at the false summit.

View from just above the false summit

Hikers know and hate this phenomenon that pops up en route to every summit. The fake out. You think you are there; you are not there yet. B warned me about this. And this was my turning point.

The movie in my mind at the false summit switched my gears immediately as I began to picture the actual summit. First I saw, actually visualized, my hopes and dreams up there, and every step up got me closer to them. Then I saw, actually visualized, the people I love most in the world standing on that summit. And I crawled; I climbed right up there under that blanket of love. Admittedly, I felt like I was going to puke at first, but within 90 seconds, my heart rate came down, and I felt like a million bucks with my Guru B ready for the celebration. 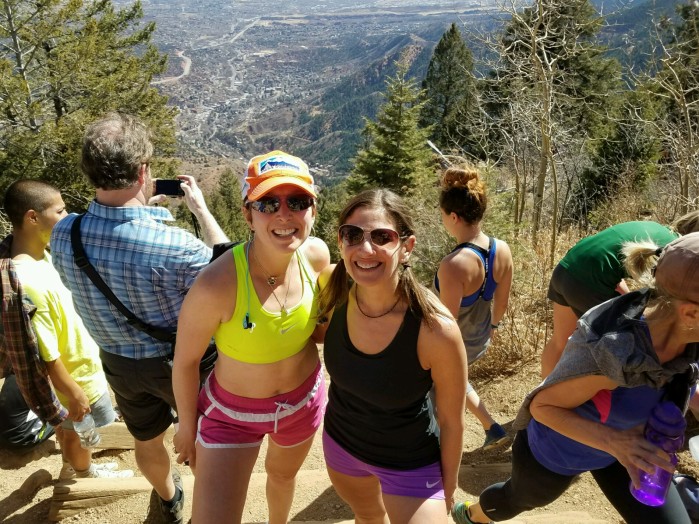 A true summit with a true friend. Suffering to Joy in 47 minutes

I’ve logged a lot of running and hiking miles. I’ve worked through plenty of mental challenges during some of those miles. But this particular work-out took me to a new place mentally and physically. I hated it. I loved it. I’m glad I went there. I am definitely going back for more.

One thought on “47 Minutes in Hell & Heaven”

Living the High Life — at a Low Price