You’ve been working at your job for eight years, beloved to your coworkers, students, clients, patients – whomever it is you interact with on a daily basis. One day, maybe July 3, you are asked to resign because the parents of two of your students or clients or patients don’t agree with your choice of marriage partner – the person you’ve been married to for almost a decade. The same person you were married to for the preceding eight years since you were employed there. You decline to resign. You are fired. Your boss and colleagues knew for the last eight years who your spouse was – no problems until two parents complained…to the archdiocese of Philadelphia. So you were fired for just being who you are and loving the person you love in your own private life. Imagine for just one minute that happened to you.

That’s what happened to Margie Winters last week  at Waldron Academy, a catholic school in Philadelphia. When Margie Winters was fired, the Waldron principal made another move. She contacted gay parents of children who attended the school to let them know their children were not at risk for being expelled, but rather the school had to maintain its Catholic teachings, implying the reason for firing Winters was her marriage to a woman. This was written to the parents: “In the Mercy spirit, many of us accept life choices that contradict current Church teachings,” she wrote, “but to continue as a Catholic school, Waldron Mercy must comply with those teachings.”
Basically, Waldron said to gay parents of tuition-paying families: “happy to take your money, but you all could never teach or work here.”
Much of the Waldron community is outraged about Winters’ being fired – the parents themselves started a GoFundMe campaign for her. The Pope himself in 2013 said: “If someone is gay and he searches for the Lord and has good will, who am I to judge?” You may be thinking a catholic school should have religious exemption, and therefore “be allowed” to discriminate based on sexual orientation (Waldron is located in Lower Merion Township which does protect against discrimination based on sexual orientation; 27 states do not), but reporters have uncovered over $270,000 in public funds awarded to Waldron which might invalidate that exemption. The exemption to discriminate, which is what let to this beloved educator losing her job.

The Court of Public Opinion

While the fact that this blatant act of discrimination occurred in a religious school may be a barrier to debating it in a court of law, it’s important to talk about the issue. In the wise words of my little sister, the court of public opinion can affect change. And since  we’re talking about school, this is a good time to lead by example – the lesson is to stand up and say something when you see injustice. If you live in Philly, have a history in Philly or have been looking for a chance to stand up for something so wrong, please share this story and speak up.
Like the facebook page also started by outraged parents
Share on facebook, twitter, social networking of choice.
#StandWithMargie
@StandWithMargie

Getting One Step Closer to This: 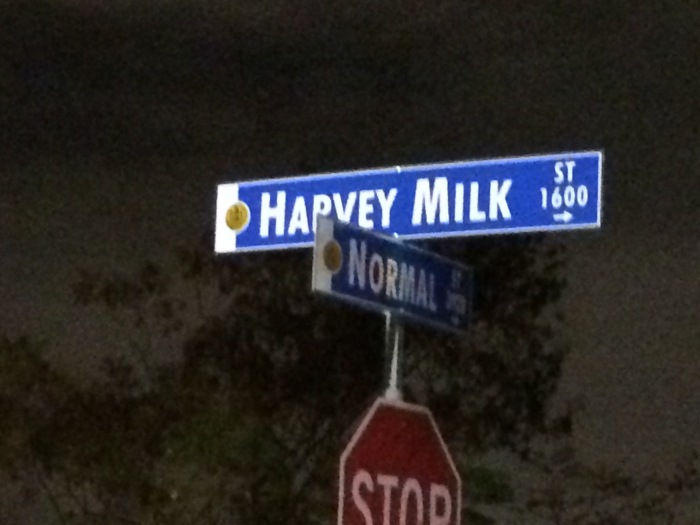 The cross-streets of Harvey Milk and Normal – San Diego